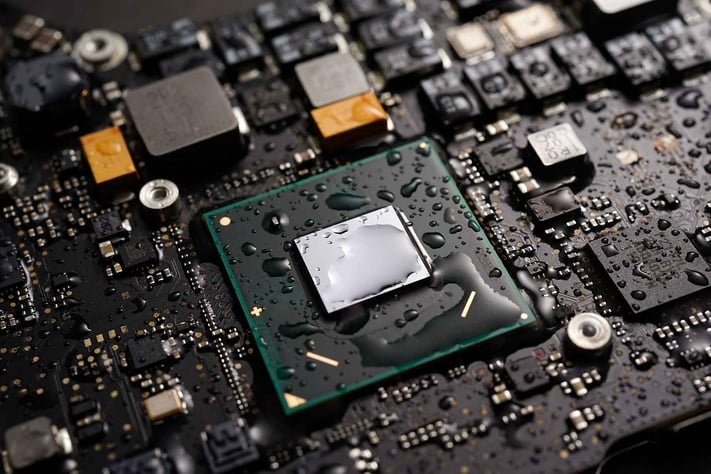 Water exposure can completely disrupt a fully functioning electrical flow, proving detrimental to electronic devices. Commonly causing short circuits, the presence of water not only proves to be a nuisance, but a hazard that typically results in permanent component damage.

Unfortunately, this threat to electronic device functionality is ever-present. From being dropped into large bodies of water to simply being used in significantly humid environments, electronic devices are constantly being exposed to harmful amounts of moisture.

Mistake #1: Relying on 2 flat surfaces and a gasket

Putting two surfaces together with a sealing gasket between them would seem to make sense. The problem is capillary action where the water spreads through the pressed surfaces until it finds a slightly larger gap where it leaks inside the enclosure.

The solution is to have overlapping surfaces with the compressible material to create the “tortuous path” so that water would have to move up, over, down, and around before getting inside.

Using fasteners is the way to close the part and it can be tempting to overtighten them to correct for a non-flatness issue, but that may increase the gap elsewhere. Instead, place the fasteners in ways that pull the parts together evenly.

Mistake #3: Not realizing the part needs to be waterproof or resistant

True story. We’ve had several customers that designed their part, launched them, and then received complaints that the device was shorting out. During their design phase, the engineers thought that the device was wiped clean. Turns out users held them under a faucet to save time. No easy fix for this one, as it is generally an expensive do-over. The lesson: make sure you know what is needed.

Even if you do a great job on preventing leaks in the case halves, you may wonder how water is still getting inside. Some commonly missed entrances are through LED or light pipes that protrude the surface, battery doors, battery contacts, and buttons. There are design principles that can help overcome many of these overlooked pathways.

We are a diversified plastic injection molding company in the Denver, Colorado area with over 100 active customers in a variety of industries, including electronics, medical, automotive, industrial, and performance sporting goods. Although we count several customers in the Fortune 500, most who depend on our services are small to mid-size manufacturers with 30-300 employees. Through 20 years and nearly 2000 parts, we have developed an ISO-registered quality management system and a standard of delivery that customers can rely on.